The vineyard, at the very heart of our history 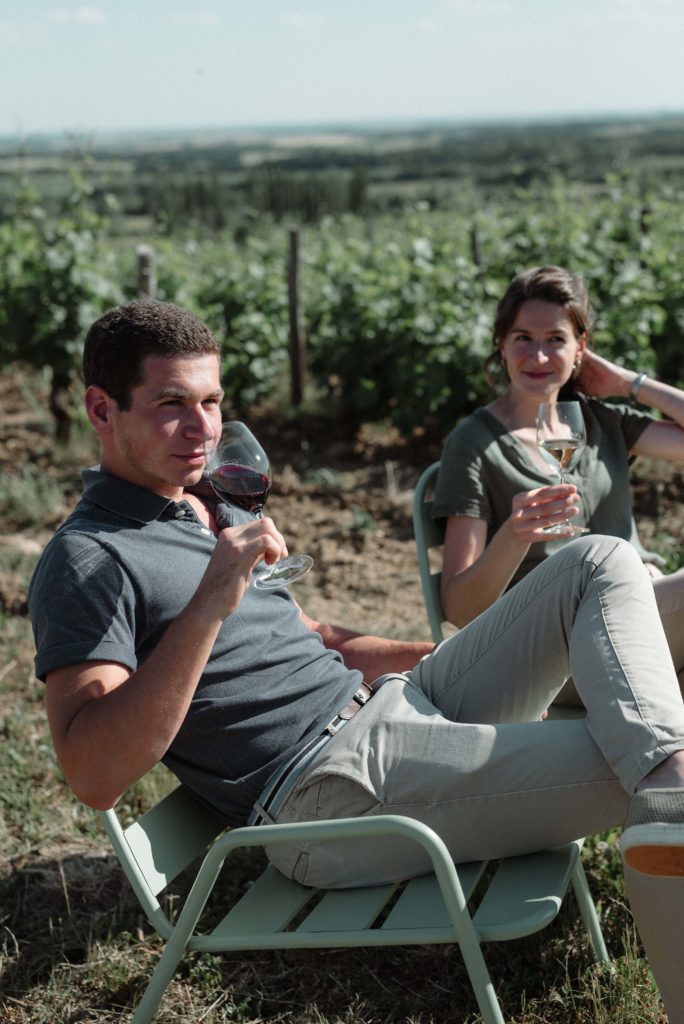 A legacy of passion

Anne inherited much more than just savoir-faire from her parents Isabelle and Pierre. She also inherited their passion. She felt strongly about gaining experience outside of the family business and chose to study at Rouen business school before travelling the world to work in the wine industry in New Zealand and the United States. What made her feel the need to travel so far? It was her open-mindedness, her desire to learn new winemaking practices and to call her own knowledge into question. Her newfound skills and experiences eventually led her back to the family wine domaine in 2014 with the desire to develop her own ideas whilst continuing to respect the family legacy. Anne sees winemaking as an art form, a creative process. She sees something magical in taking the raw materials given to us by Nature and bringing out the best in them in her role as a winemaker.

Pierre-Alexandre, the youngest in the family, has already developed extensive skills and a solid background in winemaking and is well prepared to take over the reins at the family domaine alongside his sister Anne.

Pierre-Alexandre was born in 1997 and first completed a degree in biology before studying oenology in Bordeaux. During this time, he worked for some renowned chateaux in Bordeaux as well as at the Centre of Viticultural Research in Corsica. Pierre-Alexandre also enjoys hiking in the mountains, another activity in which he must rely on his senses to guide him! He has brought fresh energy and a new perspective to the domaine as well as a strong desire to uphold the family legacy. He has a soft spot for the Menetou-Salon Pinot Noir wines and loves nothing more than enjoying them outside in the fresh air at the end of the day in the company of his friends and family.

Marie, the eldest in the family, moved to Denmark just over two years ago and takes with her this same passion for the family wine domaine. A scientist through and through, she first studied mechanical engineering before building what is already a very solid career working for multinational companies in senior positions.

Pierre has a passion for traditional methods of vinification and forgotten winemaking techniques.

He was just ten years old when he created his first wine using a few litres of leftover grape juices found in the press. Since that day he has continued to innovate and create in order to craft wines of outstanding quality year upon year.

Inspired by his grandfather’s winemaking stories which have been passed on from generation to generation, Pierre chose to complement the savoir-faire inherited from his family with oenology studies. His in-depth understanding of the complexities of winemaking has, paradoxically, enabled Pierre to keep his interventions to the strict minimum to allow the terroir and the vintage to speak for themselves.

He is curious, bold, passionate and never short of ideas. He takes pride in mastering his craft yet always remains humble when faced with the uncertainties of his profession such as the vagaries of weather and tricky fermentations. He knows better than anyone that we are always at the mercy of Nature.

Could there be a more perfect setting than a wedding, at Domaine de Châtenoy no less, to fall in love and begin a new life?

This is exactly how it all began for Pierre and Isabelle and they have now been together for 37 vintages! It was the beginning of a very different life for school teacher Isabelle. They are two very different vocations but Isabelle has never once regretted deciding to embark upon this adventure. But there are some unsuspected links between the two vocations: the need to keep constantly learning, to reinvent oneself at the start of each new year with its customs and share of surprises, and to pass something on to future generations.

Pierre and Isabelle’s shared passion has enabled them, over the years, to significantly develop the domaine. What began with just 10 hectares of vines and a primarily local clientele has grown to be one of the most extensive domaines in the Menetou-Salon appellation with 60 hectares cultivated and wines exported throughout France and around the world. What Isabelle loves most about her profession is that it allows her to get involved in all aspects of the family business, from cultivation and vinification to sales and marketing.

The Clément family and Menetou-Salon have enjoyed close ties for many centuries.

As far back as 1560, a gentleman named Sébastien Clément was already a well-reputed wine producer.

The generations followed suit and remained deeply rooted in their region, drawing their strength from these soils just like the vine itself. They have had their share of tragedy however including the time when another of the family’s Pierre Cléments died of pneumonia in 1875 whilst delivering wine by horse and cart thus leaving his 15-year-old son without a father.

It was this same son, Pierre-Alexandre, who would later build the Châtenoy family business and devote his life to his wine domaine and appellation.

He was a founding member of the winegrowers’ union established in 1891 and was also, in the early 20th century, one of the first winegrowers to replant grafted Sauvignon vines in order to overcome the phylloxera crisis.

If you wish to receive our latest news, please fill the form from our 'Contact' page by ticking 'Yes' » à la question « 'I wish to receive the lastest news from Domaine de Châtenoy' »